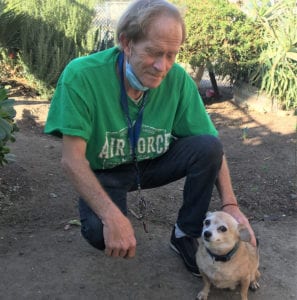 Living in his van behind a big box store in west Salinas, Richard Ferris wasn’t looking for a companion. He was doing OK by the current standards of homelessness – he had a vehicle that was livable, he had a “safe spot” behind the store, and he was able to manage his chronic back pain. Richard was working for a dear friend who is disabled. His friend has diabetes and is on dialysis. Her health was getting worse and it was becoming increasingly difficult for her to care for her little dog, a Chihuahua named Chiquito. She needed to find him a new home – and there was Richard, kind, helpful, responsible. Richard sensed that Chiquito, a young 12 years old, knew it was time to move on. So, Chiquito got into the van with Richard and began the adventure of his life.

Richard had “family” dogs growing up. This was different. Chiquito has personality. He became his best friend, almost like a child. He talks to Chiquito and cares for him. Richard knows that Chiquito takes care of him, also.

From a dog’s point of view, living with a person in a vehicle can be a nice arrangement. The two of them are together most of the time so there is lots of time for companionship, affection, bonding. Dogs generally enjoy moving, changing scenery. Chiquito met many people and other dogs while living in the van, and there was often a wide variety of food available. It wasn’t too bad.

It was difficult for Richard, though. He is a native of the area, grew up in Carmel Valley, and worked for many years in manufacturing, but he developed medical problems, degenerative bone disease in his back, he has had two strokes, and that forced him to leave the workforce. “I’m a good worker, and when I work, I prove that I want the job by putting in long days and sometimes working seven days a week,” says Richard. After years of struggling with his back and seven surgeries, Richard wound up, at age 63, living in his van with Chiquito.

When the van finally broke down and Richard was unable to pay to repair it, he had a decision to make. He could join the others who are living in tents on the street, in vacant lots, and along the train tracks. He had Chiquito. His best friend. The companion he was responsible for and who was dependent on him. Richard has pride and he might not have asked for help. He may have decided to stay outside, except for Chiquito. Richard and Chiquito decided to ask for housing assistance at Dorothy’s Place.

Richard and Chiquito are a pair. They each have dignity, and a presence that encourages respect and admiration. Chiquito has lived outside, tangled with other dogs, and even had a scary run-in with two owls in the middle of the night. He is a small dog and might have been an owl’s midnight snack if Richard hadn’t rescued him. There was also the incident with a wild boar . . . now Richard and Chiquito have a room in the peaceful and comfortable residence at House of Peace.

They have support and guidance from the staff, and they have a goal. The staff knows how important Chiquito is to Richard and are supporting Richard as he applies for housing and takes care of his medical needs. Richard appreciates being inside, particularly during the pandemic. It is safe and very comfortable. Chiquito has become a house pet, the House of Peace mascot. Richard says, “Having Chiquito relieves a lot of the stress of being alone. Making Chiquito happy makes me happy.”

Without your financial support, our work doesn’t happen. Join us! Stand with us as we assist people from street life to home life. Your solidarity is humbly and gratefully received.